Intrauterine Devices (IUDs) are a form of birth control that prevents implantation of a fertilized egg in the uterus. Some IUDs contain copper, have side effects, and must be placed inside the uterus by a healthcare professional. The number of years that an IUD is effective depends on the type of IUD.

Signs of complications are pain, bleeding, and discomfort and could warrant a pelvis ultrasound. As a sonographer you may be required to determine placement of an IUD by performing a pelvic ultrasound. It is important to know that based on studies and literature, 2D ultrasound imaging is not sufficient enough to accurately determine the position of the IUD in the endometrium. Benacerraf, Shipp, and Bromley (2008) states that the standard 2D imaging demonstrates the shaft of an IUD with precision BUT is not able to show the position of the arms of the IUD accurately. A 3D ultrasound is necessary to accurately determine the position and location of the IUD in its entirety. Lets take a look at this image of an IUD seen in the 2D plane. 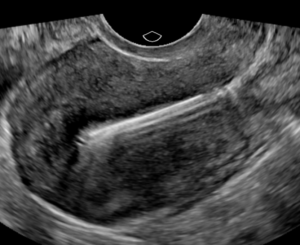 It is important to go a step further and construct a 3D image of the endometrial canal to image the IUD shaft and arms. Below is an image of the same IUD in a 3 dimensional plane. 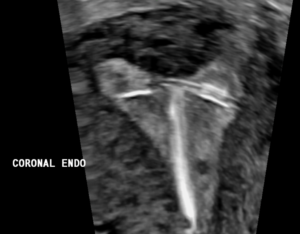 You see that the IUD is within the more echogenic endometrium and does not penetrate the hypoechoic myometrium. The shaft of the IUD appears close to the myometrium which may be something that should be followed-up later.

If you are determining IUD placement and location without the use of 3D imaging you are not accurately confirming IUD placement. A quick course of creating 3D imaging is something that could be done during office hours from Application Specialist of your ultrasound equipment. Or you can email me at yonellademars@sononotes.com and I can send you the steps in creating the 3D image on a Epic 7 ultrasound machine.

“Think beyond the waves”